The Bishop of London

The Bishop of London 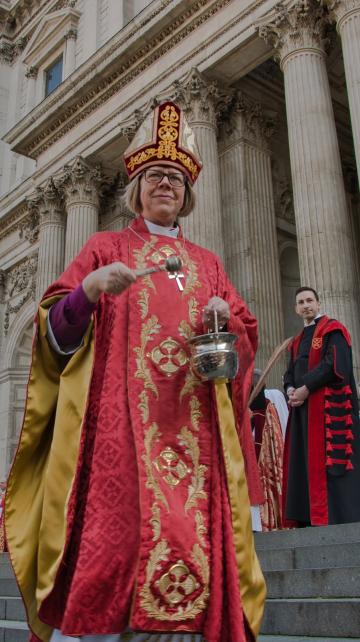 The Rt Revd and Rt Hon Dame Sarah Mullally DBE is the current Bishop of London.

St Paul's Cathedral is the seat of the Bishop of London – The Rt Revd and Rt Hon Dame Sarah Mullally DBE. The name 'cathedral' comes from the Greek and Latin word cathedra meaning 'chair', as bishops, like other authorities in the ancient world, sat down to teach. The Bishop's physical chair in St Paul's can be found at the south-east end of the Quire.

The Rt Revd and Rt Hon Dame Sarah Mullally DBE was installed as the 133rd Bishop of London at St Paul’s Cathedral on 12th May 2018.

Bishop Sarah studied first at South Bank University for her BSc followed by a MSc and then at Heythrop College, University of London where she got her MA. She was awarded Honorary Doctorates of Science from Bournemouth University, (2004), University of Wolverhampton (2004) and University of Hertfordshire (2005) and was made a Dame Commander of the Order of the British Empire in 2005 for her contribution to nursing and midwifery.

She is a late ordinand, who before ordination was Chief Nursing Officer in the Department of Health. She trained for the ministry at the South East Institute for Theologian Education and served her first curacy at Battersea Fields in Southwark Diocese from 2001 to 2006. From 2006 to 2012 she was Team Rector at Sutton in Southwark Diocese. From 2012 to 2015 she was Canon Residentiary and Canon Treasurer at Salisbury Cathedral before taking up her current role in 2015 as Suffragan Bishop of Crediton in the Diocese of Exeter.

Bishop Sarah is married to Eamonn and they have two children. She has continued her interest in the health service having been a non executive director at The Royal Marsden NHS Foundation Trust then at Salisbury NHS Foundation Hospital. She is a member of Council at King’s College London University. She is a novice potter.

Although the Dean is responsible for the running of the Cathedral, the Bishop is the principal minister here, and she presides and preaches at major Christian festivals and on some other national and civic occasions. The Bishop is also the Cathedral's Visitor – a role which gives the bishop the opportunity to enquire into cathedral affairs and, as a result, to give directions to the Chapter or to Cathedral staff she considers will better enable observance of the Constitution and Statutes. The Bishop also appoints many members of our Council, as well as licensing its clergy.

As well as being the Bishop's seat, the Cathedral is a centre for the Bishop to use in her work and mission across the Diocese of London, which covers much of London – from Bow in the east to Heathrow in the west, and north to Enfield and Northwood. In the presence or under the authority of the Bishop, clergy for the diocese are ordained at St Paul's, lay ministers are commissioned, and significant mission initiatives are celebrated. On a smaller scale, parishes come on pilgrimage to the Cathedral and are prayed for as part of our daily services.

You can read more about the Bishop’s role on her website: bishopoflondon.org.

More about our people 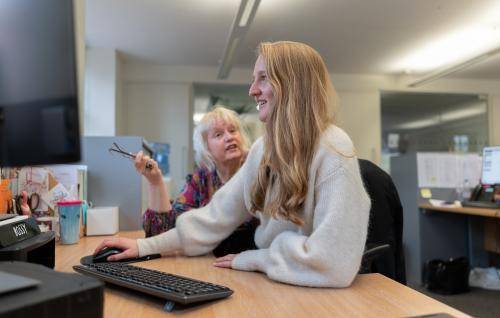 Understand who helps to govern St Paul’s and how each of our governing bodies works. 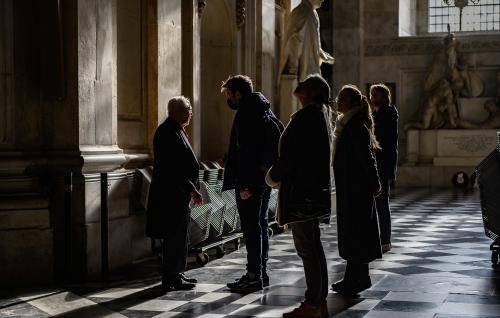 Meet the full-time clergy who help organise our services and provide pastoral support to the Cathedral’s visitors and worshipers. 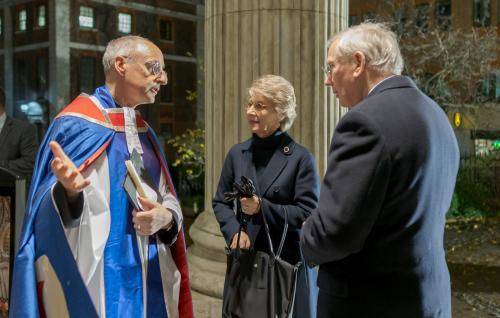 Meet the Dean and members of the Chapter, who provide strategic leadership of the Cathedral.

St Paul’s is open for worship every day, and our services offer a chance to hear our incredible Cathedral choir and the beautiful acoustics of our building.